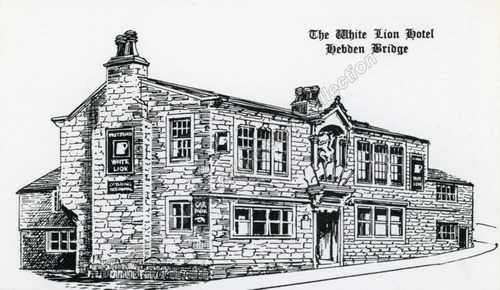 Postcard purchased in 1993, information on the reverse states: The White Lion was built in 1657, eight years before the Great fire of London, at this time the only other building of importance in Hebden Bridge was Bannister's Farm, on the site of the former White Horse Hotel.

In the early days the White Lion was known as Kings Farm, due to its occupation by Susan King, widow of James King of Willow Hall, Skircoat. Before her marriage Susan's name was Naylor, she lived at Sowerby, and it is presumed that her family owned the White Lion earlier in the century. She lived at the White Lion until her death in 1690.

The stables across the road, together with a "horse Miln" for grinding corn, two packhouses - later converted to cottages - and a barn, situated about 100 yards away in Bridge Gate, later the warehouse of Messrs Cleggs, Provision Merchants - then served the main building of the White Lion.

Since Susan's day the White Lion has undergone many chages, the first storey lost its 17th century character due to certain embellishments in the 18th century, but the bottom portion and the rear of the premises retain the original entrance and mullion windows similar to those of other farmhouses of the same period in the district.

Throughout the 18th and 19th centuries the White Lion became a hostelery of increasing importance, situated within a short distance of the Old Hebden Bridge it became a handy place for travellers to stay when proceeding between Lancashire and Yorkshire. When the turnpike road was built its importance increased as it was on the only regular route of the stage coaches plying on the valley route between Halifax and Rochdale.