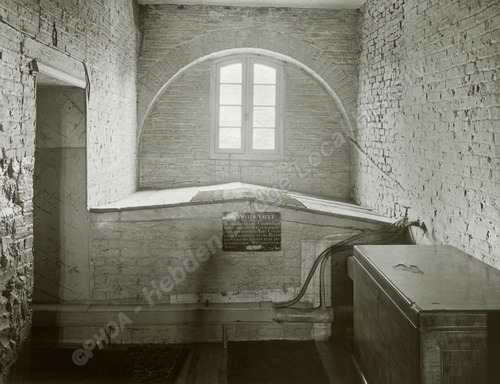 Slide 5 - It is said that at the Restoration, fearing the body of her father would be maltreated, she caused the corpse to be removed from Westminster Abbey, and brought to Newburgh, and interred in a vault within the housed. This vault is situated at the top of a flight of steps at the upper part of the house. On a board is the following lettering
'Cromwell's Vault
In this vault are Cromwell's bones, brought here it is believed by his daughter, Mary, Countess of Fauconberg at the Restoration, when his bones were disinterred from Westminster Abbey'

The late King Edward, when Prince of Wales, on one of his visits to Newburgh Priory, showed great interest in this vault and after inspecting it one day, laughingly remarked, 'Look here Sir George , I shall never be satisfied about this until you open the vault. Why not send for the workmen at once and have it opened now ?' Sir George 's reply was with his usual old-world courtesy. 'No sir', he said 'I have been brought up in the belief, I shall die in the belief and I will not open the vault for any body'
And the vault has been unopened till this day.