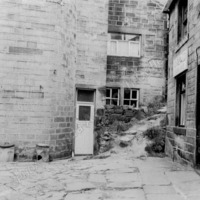 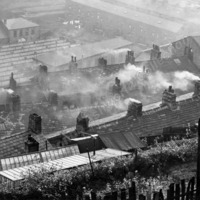 Looking over the roof tops of High Street. 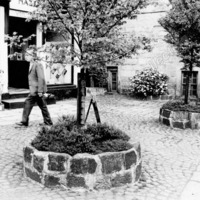 The shops on the left have since been demolished. 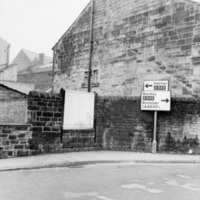 The end of the White Swan Hotel 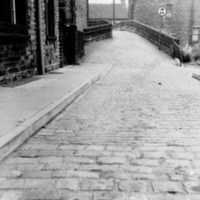 On the left the Hole in the Wall pub and the building on the right over the bridge has been demolished. 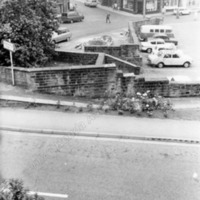 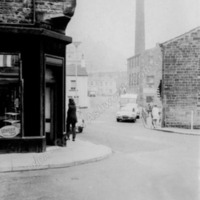 Taken from the end of Crown Street, on the other side of the Square The Shoulder of Mutton is on the left and Bridge Mill the right. 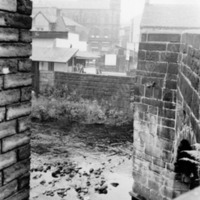 On the left is the wall of the Hole in the Wall pub, over the bridge is Bridge Gate. In the centre is the Co-op building but this view cannot be seen today as as a new building has been constructed in the gap on Crown Street. 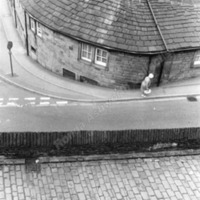 View from Birchcliffe Road down to the junction of Bridge Gate and Keighley Road. 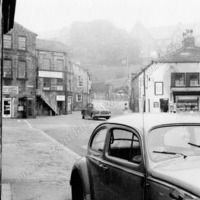 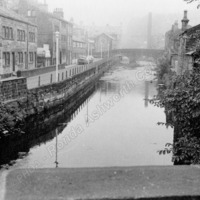 Looking from West End Bridge towards Old Bridge with Old Gate on the left and the rear of buildings on Bridge Gate on the right. 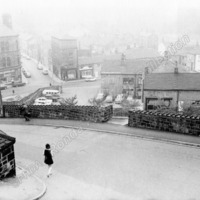 View from the bottom of School Street over Lees Yard and down Crown Street.

Mick Shepley believes the girl in the picture may well be his now wife, when she was about 13/14 in 1970. Her name then was Margaret (Maggie) Calver and she lived at 10… The site of the White Horse Hotel which was demolished in 1962. On the right the Council Offices. The timber building on the left and the tall building the other side of the bridge have been demolished and the area opened up. 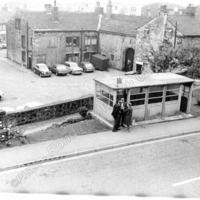 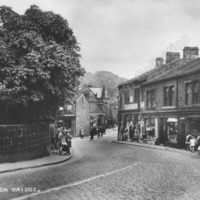 Date unknown but before the building in the centre at the junction of Bridge Gate and New Road was demolished in the 1930s for road widening. Blackburn's Ironmongers is on the end of the row of shops, and the window of Alice Longstaff's shop,… The gentleman standing in the archway is Hebden Royd UDC Surveyor, Mr Moyse. The tenements on Old Gate at the bottom of the Buttress were demolished in 1967 as being unfit for human habitation. 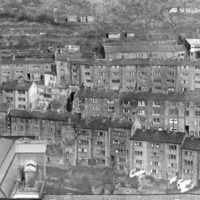 This picture was taken in December 1958 when demolition of the north side had just started. Above it is Hugh Street which has also been demolished. 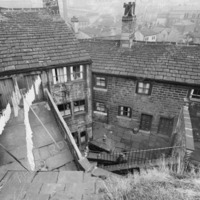 A warren of tenements Buttress Brink was declared unfit for human habitation and demolished in 1967. 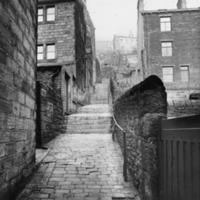 The steps, which are still there, lead from Bridge Lanes up to the now demolished High Street. 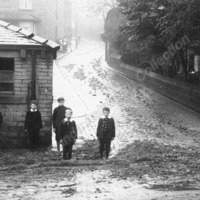 After the flood at the junction of Moss Lane and Hanginroyd Lane. The building on the left has had many uses: Pentecostal Church, at the time of this picture a school, and later an ice-cream factory. 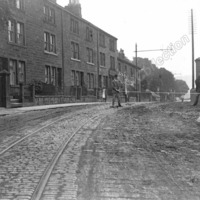 View after road widening. The bunting would have been for the coronation that month of George V.
View all 51 items