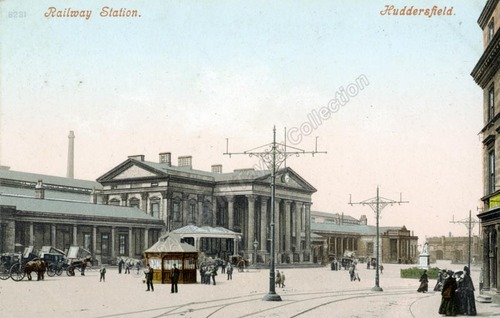 The magnificent Grade I listed station building; the imposing frontage was described by John Betjeman as 'the most splendid in England' and Nikolaus Pevsner considered it to be one of the best stations in the country. Its grandeur owes much to the influence of the Ramsden family who owned most of Huddersfield at the time it was built in 1846/50 and who insisted that it reflect their status. The station was operated jointly by the London & North Western Railway and the Lancashire & Yorkshire Railway and they each had their own Booking Offices in the pavilions at the end of the colonnades which extended out from the central block with its giant portico. Above their respective pavilion is the company’s crest but in place of the LNWR's it is that of the Huddersfield & Manchester Railway who had promoted the line prior to becoming part of the LNWR.

In the foreground are lines of the Huddersfield Corporation Tramways which operated between 1883 and 1940. Steam locomotives were initially used to pull the tramcars but the system was electrified in 1900 and electric trams started to run in 1901; the cable gantries can be seen here but it doesn’t appear if the cables had then been installed.

In 1968 the station building was purchased by Huddersfield Corporation to save the town’s finest building from threatened demolition.