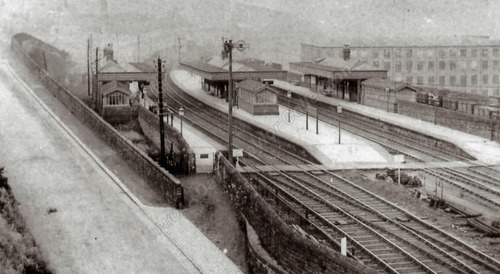 Slaithwaite Station like other stations on the LNWR’s Huddersfield Manchester line along the Colne Valley opened with the line in 1849; it was enlarged in the mid-1890s when the line was increased from two to four tracks. It is seen here with well maintained platforms at an unknown date, but probably pre-1948 Nationalisation, or even earlier. The LNWR’s ringed semaphore signal on the slow lines does not appear on 1960s photos nor does the foot/barrow crossing but those later photos do show a standard semaphore signal at the end of the island platform. A steam locomotive is just discernible through the haze approaching the fast lines platforms.