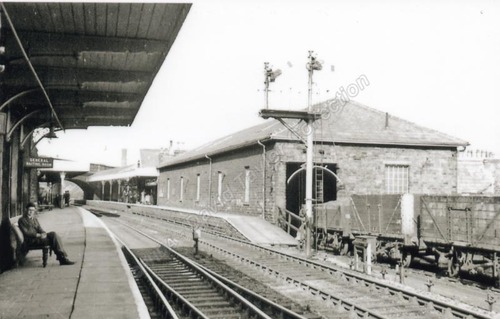 One of several stations in the civil parish of Saddleworth which, although on the western slopes of the South Pennines, was in the West Riding of Yorkshire up until local government re-organisation in 1974 when it passed to Greater Manchester. It is the only one of those stations to have survived the Beeching axe in 1968.

The station, seen here in 1954 looking in the Huddersfield direction, opened with the line in 1849. It was unaffected by the widening of the line in the mid-1890s as there wasn’t enough room alongside the existing double tracks and instead a loop line, the Micklehurst Loop, was built by the LNWR between Diggle and Stalybridge with its own intermediate stations.

As mentioned the station survived the Beeching axe but lost its buildings and passenger facilities until a new ticket office, waiting areas, toilets were opened in Spring 2009 with step-free access to the Manchester-bound platform but the Huddersfield-bound one can only be reached by a footbridge.