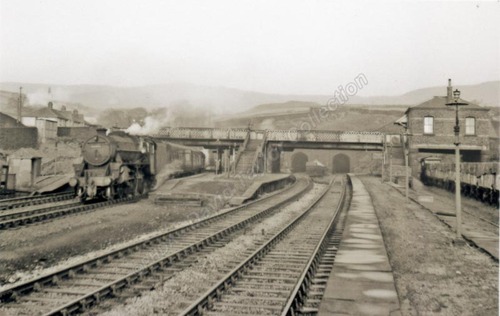 The station had opened with the line in 1849 at the western end of the 3 miles 57 yards (4880 metres) Standedge Tunnels, a canal tunnel and a single bore railway tunnel at the time. The station was enlarged in the mid-1890s when the line was increased from two to four tracks. It is seen here in BR days and in the background are the western portals of the two single bore railway tunnels, the Nicholson Tunnel (1848) on the left and the Nelson Tunnel (1871) on the right, the 1894 double bore tunnel is hidden from sight by the steam hauled train at the station.

Seen here at an unknown date between nationalisation in 1948 and the line reverting to double track in the mid1960s. On the right a rake of goods wagons in a siding. The station was closed in 1968; there have been unsuccessful campaigns to have it re-opened.